Clara's Woods
Clara's Woods is a 40-hectare (100-acre) wooded area in the southern part of Stony Brook University, and home to many plants, animals and fungi.  Clara's Woods sits on a moraine formed by an Ice Sheet when this region was covered by a glacier about 20,000 years ago. Learn about the geology of Clara's Woods.

There are about 20 species of trees in Clara's Woods, including the endangered American Chestnut, as well as Sweet Birch, American Beech, Tulip Tree, and several oak and hickory species. Other plant species include Spotted Wintergreen, Pennsylvania Sedge, and Partridgeberry. Learn about plants and fungi of Clara's Woods.

By 2021, more than 100 species of birds have been recorded in Clara's Woods.  Red-tailed Hawk and Great Horned Owl have nested and successfully fledged young. Other animals include Box Turtle, Garter Snake, Eastern Comma, Morbid Owlet and many others. Learn about animals of Clara's Woods.

Clara's Woods is an ecologically important area.  In addition to the many native species it provides habitat for, Clara's Woods is an important link in a network of woodlands in the region.  Part of Clara's Woods extends immediately across Marburger Drive from the Ashley Schiff Preserve (see the map below). On its western side, Clara's Woods  is across the Stony Brook Road from the woodlands around the Research & Development Park, which in turn lies to the east of East Farm Preserve.  Thus, Clara's Woods allows ecological connectivity of the Ashley Schiff Preserve to the wooded areas to the west. Ecological connectivity helps prevent the worse effects of habitat fragmentation, the breakup of natural landscapes into small patches, which is a major threat to biodiversity. 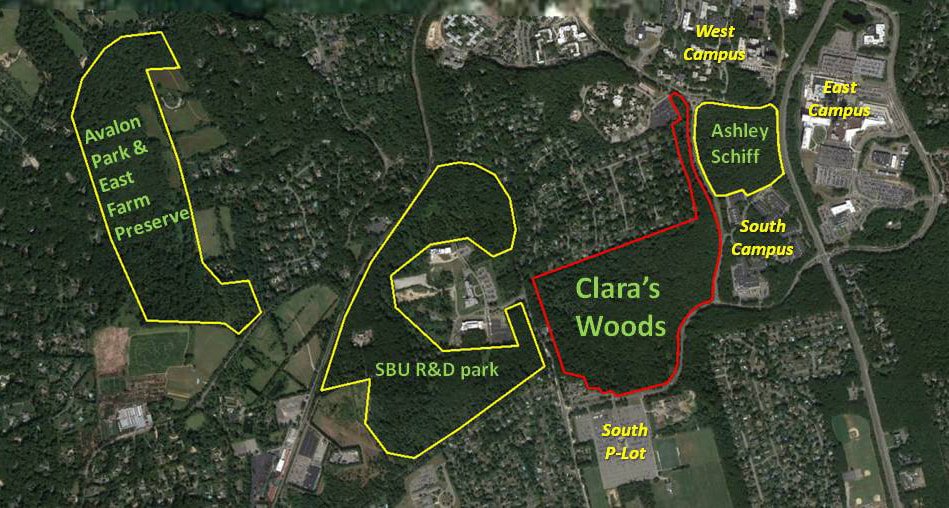